Your plans with Kemetism

Does anyone here have any plans for the future that imvolve Kemetism? I am curious whether you want to adopt new practices or worship new gods, or just vontinue with the tradition.

I’d like to get to know local people interested in Ancient Egyptian paganism in my local area. Will see how that goes!

Apart from that, I’m looking into the different types of witchcraft and magic. Partly to see if any practices/knowledge will enhance my own Kemetic path and partly to be more social.

I want to continue with my Kemetic reconstructionist path and I might look at ancient Egyptian rituals in more detail. There are some parts of it that I haven’t been so into, but I think gaining more understanding will be beneficial.

Deities: Djehuty and Seshat as always! Also been a bit more connected to Bastet and Hatshepsut lately.

I’d like to buy some new Oracle cards when I can.I’ve been using Moonology cards more frequently lately.

To be perfectly honest I have no idea right now. In 2017 I withdrew from the general pagan community to focus on my Kemetic practice (and in the process setup this site). Things went deep and then not. I’m on the upward slope right now which is currently taking me to strange an unexpected places almost on a daily basis.

I feel as this phase draws to a close I may revert to an earlier phase of my journey which more-or-less ditches much of what I’ve done over the past few years. I have never been a great pagan, Kemetic or chaos magician and if pushed would use the lower case versions of all of those. Full on practice of all of them really no longer appeals to me. My early stages I made so much progress without knowing dogma and I feel going back to that, even for a short while may be beneficial.

Don’t know yet, maybe will decide by the autumn.

I wish you all the best @kev . Personally, I hope you come back though

I had a feeling that something was going on with you/your path.

This popped up on my news feed this morning, which I found interesting and I thought of you Serket is one of the four protective deities of ancient Egypt.

I’m not far away and will always be partly Kemetic in one form or another, just not finding any value in rigorous adherence. Never have been, and attempts to see if it works for me over the past five years have shown it does not. No real change.

Sadly, the more I connect with the “community”, the further I feel from my own practice. I suppose its my bad habit of trying to conform to other peoples standards. I’m just starting to feel comfortable in my own skin so hopefully I will get more confident with a more independent practice.

Some goals to set myself? Connect more with the gods I currently talk to (Nebthet, Sutekh, Anubis, Bast) and see where other relationships go (Hethert, Tasenetnofret, Heru Wer, Khnum, Wesir). Try to establish a regular time for reflection/meditation for my own mental health. Work on my witchcraft practice and spirit work. The less time I spend on this, the more ill I seem to get. “Shaman sickness” perhaps?

I’m feeling this too, the pull of a new season of magic and spirituality. A Big Name Pagan once told me (when I was having the same problem I am now) to “burn it all to the ground and see what survives” Not literally of course, just to stop all and see what is missing…then that’s what’s important. I found I needed less structured ritual and something more…organic? I spend more time in nature and less time worrying about how instagram worthy my shrine is. The statues aren’t opened, the gods aren’t in there…I got out and lived Ma’at with Them.I suppose this constant cycle of renewal I go through is why the Bennu/phoenix is one of my personal symbols.

Sorry for rambling, had too much coffee!

Well, I was going to say how little success I have had trying to find local people interested in Ancient Egyptian paganism. However, things seem to have picked up. Two people are interested in meeting up and one of them said she might know others she can bring along. We will see!

P.S. please ‘ramble’ on as much as you like Sen

I am quite new to Kemetism but I believe my future plans would be somewhere along the lines of bringing other people of faiths into this faith but showing them it doesn’t mean they have to discard their old/current beliefs. I believe Kemetism is for everyone and it is interrelated with other faiths more than people expect. You have to remember all religions take from one another and all had beginning/idea/philosophy taken from another faith.

Some of you maybe thinking, how would this work with people who are Jews or Christians who are told there is only ONE and not to worship other idols etc, my short answer to this, I believe there is one supreme God in Kemetism, Amun-Ra, or later on known as Aten. I don’t want to get too deep in explaining this but this is one concept of many that I believe may attract others to the faith.

The only thing we need to be careful about here are upsetting other faiths or allowing new believers into twisting Kemetism by bringing their previous faith and trying to balance it in a way that will water-down the true meaning and philosophy of Kemetism.

it doesn’t mean they have to discard their old/current beliefs.

I agree with this.

I believe there is one supreme God in Kemetism, Amun-Ra, or later on known as Aten.

I’m currently reading a book about Akhenaten, which looks at archaeological finds from his city. It’s interesting and fascinating to find our more information about his motives/beliefs. However, I’m a polytheist/squishy polytheistic type of person, so I don’t believe in a single supreme god or goddess.

The only thing we need to be careful about here are upsetting other faiths or allowing new believers into twisting Kemetism by bringing their previous faith and trying to balance it in a way that will water-down the true meaning and philosophy of Kemetism.

I think we need to be careful here. Certainly share your views and practices, but I think each person should be free to believe or practice what they feel is right for them. I think a person’s personal beliefs and practices are between that specific person and the Netjeru.

The Akhenaten reign is very interesting to read and research about. Although alot of Egyptologists and Historians are still debating to this about this Amarna period. I am currently reading this book… 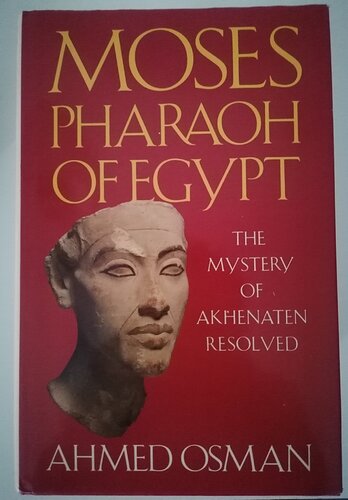 You should also give this website a read and let me know what you think of the claims, I found it a really exciting and interesting read: 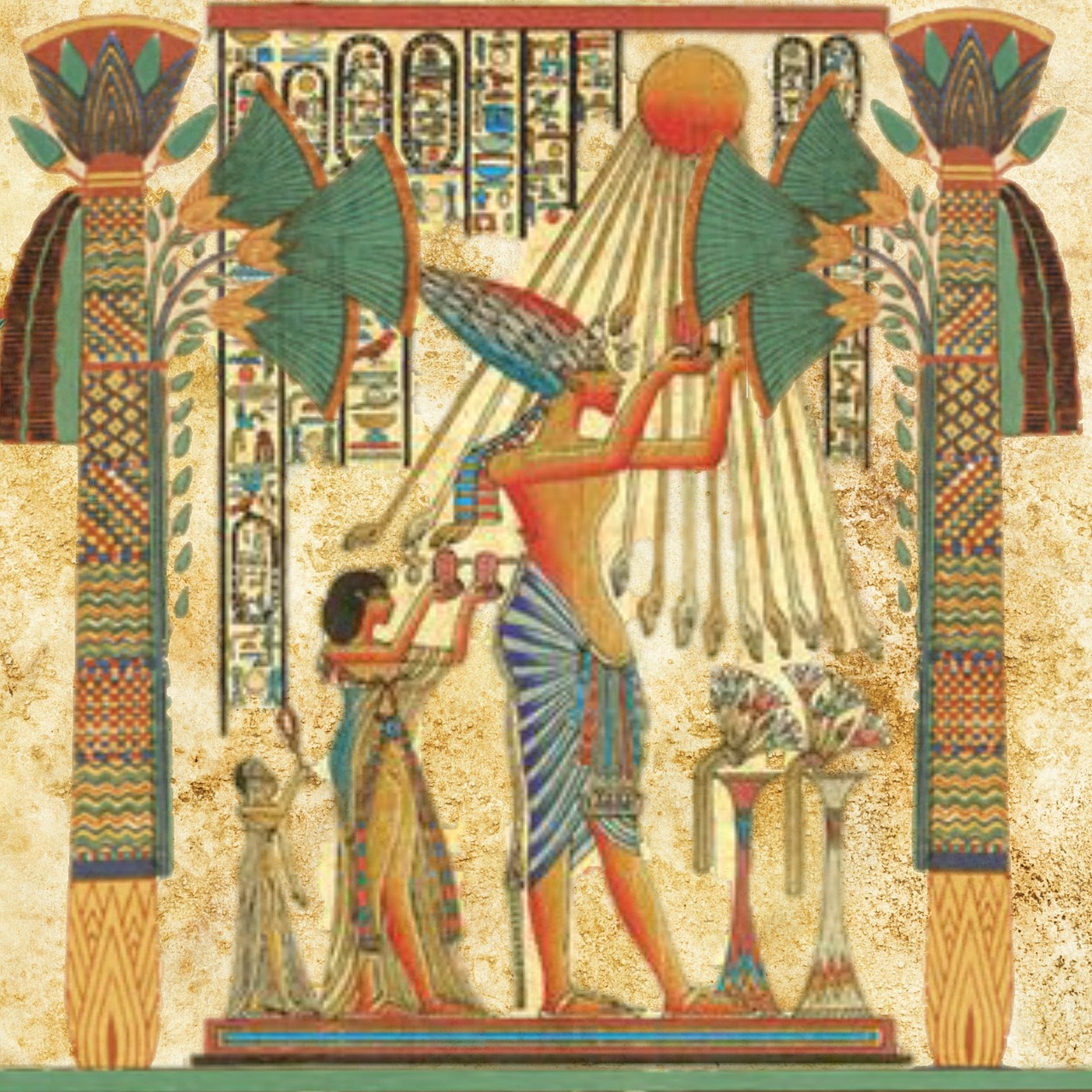 The Nephilim in Egypt? - www.onfirecafe.net

Visit "On Fire" Café -The Nephilim in Egypt? The Pyramids? Who Built them? Let's explore a theory about the Fallen Angels Offspring-Nephilim.

Without wishing to offend anyone, I do not subscribe to the beliefs that the pyramids were built by aliens, or angels, or anything other than the hard working people of Kemet. I have read the works of Hancock, Bauval, Lemesurier etc and, whilst it makes for a fascinating read, I don’t think it is grounded in much fact. (I even did a presentation on the alignment of the stars vs various sites around the world for my GIS module at university. I concluded that we humans have a natural impulse to make such patterns and connections, and we often assign more meaning than there is). Again, just my personal view.

You talk of bringing in new believers…what exactly do you mean by this? Are you aiming on starting a church of some kind? How does your research into nephilim fit in with the actual historical texts? You’d have to be careful to explain that what you are preaching is your own set of beliefs, not some official kemetic canon.

There is no one Kemeticism/Kemeticism. There are several forms of Kemeticism that follow slightly different philosophies and traditions. Some are hard polytheist - there are many gods -, some are monolatrous, like the Kemetic Orthodox Temple, where the gods are individual aspects of one supreme force (a bit more complicated than all gods are just one god). You even get African-American branches of Kemeticism that believe the gods are just archetypes and analogies. A sort of atheist Kemeticism. There are those that believe honouring the gods is the most important aspect of the faith, then there are those who prefer to live in Ma’at and serve the community.

I am a remetj in the house of Netjer and lean towards squishy/hard polytheism. I try to balance honouring the gods with living my life and trying to be a better person. I have a busy shrine but don’t spend too much time in ritual. I am married to a henotheistic Christian. They are Church of England but believe the existence of other deities. They believe that Yahweh/Hashem is their one supreme god and only worship him, whilst being respectful of my faith and Netjer. We are teaching our child about our faiths but leaving space for her to walk her own path.

This is the book I’m reading: 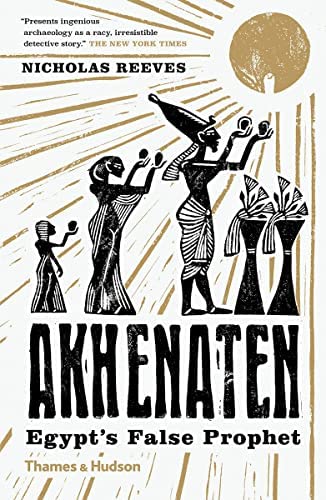 I had a quick look at the article. It quotes the Bible a lot. The ancient Egyptians haven’t mentioned giants anywhere that I know of, so I can’t see that idea of nephilim would relate to them.

When I was a Christian, I speculated that perhaps the nephilim existed and were mistaken for various pagan gods. Of course I don’t believe any of that now! The creation of the nephilim involves ‘encounters’ between angels and humans, which is a Jewish/Christian belief, of which I am neither.

I definitely believe that the ancient Egyptians built the pyramids.