A place for those that follow Hathor can hang out.

Hathor began to play a major part in my life a few years ago and I often call upon her. She has many festivals too, the most it seems that I’ve found, if anyone wants to do something for one of hers then I’m up for it. Most though do tend to involve music, food and drink

Music, food, drink? Sign me up!! I’m indulging my Aphrodite-Hathor priestess self this Beltane season <3

I have a bit of a gap for Hathor (and other festivals) on my calander, next up for her is end of June

Plenty of excuses to bring her in at any time! do it just because it’s a Friday!

She has sneaked onto my altar not long ago. Count me in for the festivities

Hathor has been big in my life for nearly 10 years now. I wasn’t interested in any Gods like her, but then I met her in deity possession and she dispelled any notions I had of keeping her out of my life.

It turns out that the Hathor I get is Hathor as Lady of the West, Hathor-Amenti. I always thought that wasn’t possible because she’s still so warm, expansive, happy, full of love and light. But I guess that’s how Hathor-Amenti would be! Welcoming and comforting the dead with such affection and warmth.

I’m Kemetic Orthodox and waiting for a divination to see if Hathor is a Beloved in their system, and if so, is Hathor-Amenti the Hathor that should be listed or is it another. I’m very curious! Maybe it will be just vanilla Hathor, from whom all Hathors spring, who is to be part of my life, and Hathor-Amenti is just how she has manifested for me right now. Or maybe another Hathor will move forward in my life (there are so many!).

I don’t think I could say no to any of them. She’s so lovely in all her faces.

I quite agree, Hathor started butting into my life, several years ago, not quite as long as you. My primary goddess Selket is generally picky over who I talk with (a big bit if history behind that), and eventually she let Hathor in as part of my healing work at first. Over time Hathor gained more prominence until it got to the point where I now (a few years) combine them both as Selket-Hathor (Serqet-Het-Hor).

I find her much the same, very deep but in a different way to my beloved Selket. Love them both.

Yet another festival for Hathor today. A memory of last year’s fun one appeared on my Facebook memories thingy, so will have to repeat some of that fun tonight

Music random play on the way to work also went a little nuts and switched to go through all my Rocky Horror sound track albums which was fun! Careful kids, its not advisable doing the Timewarp while driving

Yet another Hathor festival today.

the timewarp has got me into enough trouble as it is. I am not in a hurry to do it again haha 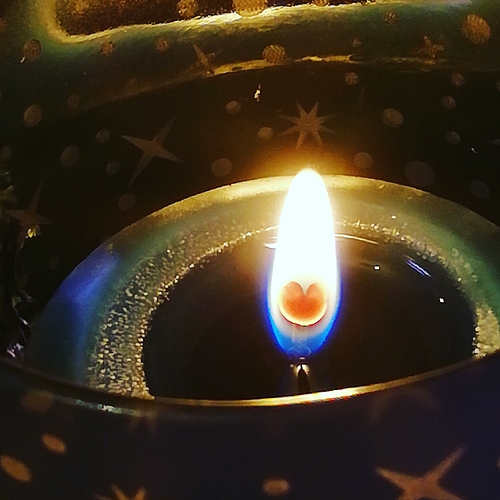 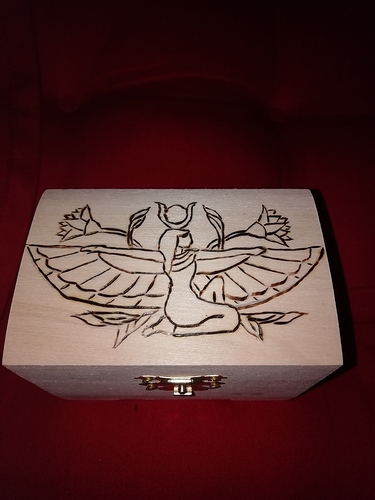 I realise that I never got back to this. So I had my divination done. Hathor-Amenti is indeed a Beloved of mine in the KO system, although I was cautioned that this is merely the face she’s presenting to me and that she will use many others to communicate with me.

I’ve certainly had that experience. I recently managed to acquire an AGI “Isis” statue, which I’ve placed in a cabinet to perform regular ritual to (if less frequent than Wep’s). 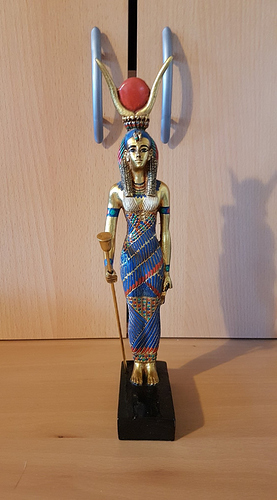 The Hathor I get through this statue is nooot the Hathor I get most of the time. This is Hathor in all her power, and her glory, this is Hathor as queen and leader and warrior. And a mother and a lover and a mistress of dance and joy and all those wonderful Hathor things, but she reminds me in many ways of Aset, and to a lesser degree, Mut (particularly Bast-Mut).

I’m enjoying doing ritual for her, celebrating her (as that’s more the focus of her ritual rather than clothing). That said, I’m glad I don’t have to do it too often. I’m currently in kind of a once a week cycle with it, and I’m happy with that. It’s often enough that I get to be overjoyed at seeing her statue regularly, and at celebrating her existence, but not so often that I exhaust myself having to do it on top of my two other rituals which I do have a more frequent commitment to.

What a wonderful statue and admisson. You don’t need to worry that you’re not there every day for Her. I’ve been there too with mine, and it took me a while to realise that while the statue is their physical presence in one place, they are in our hearts and with us too, so long as we at least give them a nod in recognition in between then they are fine. They know we have to live our lives and will always be there when we need them.

Like the ancients Egyptians did, I keep my primary focus point by the front door, that way I will always see them in passing and can throw them a nod.

Hathor (and to be quite honest, all of them in their own ways) are quite something to spend time with and I will admit that I’m not great at keeping things up. They understand

Hathor is one of my main deities and has a prominent place on my shrine, yet I feel I should do more for Her. I was once told via divination that Hathor wanted to sail with my blessing. I’m still trying to work out exactly what that means!

I think She may also be my daughters guardian or patron. Many years ago, before even considering children, I blurted out that my daughter would be dedicated to Hathor and known as “the Grace of Hathor”. Ten years and a difficult IVF journey later and my three month old daughter is now asleep in my arms. She is only soothed by music and being danced round the room. Dua Hathor!

I adore Hathor (almost as much as my primary goddess Selket). I’ve found her to be supportive, not as intense as my Selket, but always there if needed and when called warm and soothing. She was the one that gave me greater understanding for my healing work which Selket began.

As far as knowing what she, or any of them want, well. just go with the flow. Keep up the conversations and watch for signs of feed back - dreams and odd occurrences

But today is different. Another Hathor festival today. As this leads into my biggest event on Thursday I am pulling everything out ready.

Strangely (and i know why and not going to tell) feeling in energised to move past a few things and enjoy the festivals this week.

I know Hathor is with me today for sure. A beautiful glow of sun light just a little while ago over the cliffs for my daily call to Ra, followed by the most amazing omelette I’ve ever made for breakfast.

It is going to be an interesting day.

Have fun folks and stay safe.

Glad you’re having a good day!

It’s the second day of my new job and it’s going well.

Oh great news about the job. Thursday if my festival for Selket.

Oooo while I’ve half way through proof reading the next book instead tonight, because its Hathor I will mix up some special oils. Yes, that would be most fitting.