Another wonderful article appearing on my news feed this morning regarding musical instruments. While I’m rubbish at music (which is why I love my sistrum so much - no skill required), I do have an interest in what they listened to.

Eva Dadrian | Many of the instruments used by Egyptian musicians today have their roots in Pharaonic times, from drums and cymbals through to lutes, harps and trumpets.

A few years ago I did have a go at making a flute which was a challenge. I really want to have another go now.

Been toying with the idea of making an Egyptian harp. Found this article which gives an idea for the general construction:

Not sure when I will get a chance to actually do it but its bubbling away and I’m sure it will happen at some point. Might start simple which is a basic bow first. 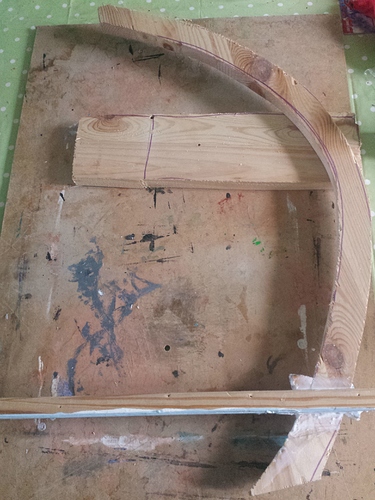 And here is verson one more or less complete. Strung six of the 12 strings to test the bow harp. Wasnt expecting much volume without the sound box that was added 100s of years later, but was pleasantly surprised. All the strings need tightening up and finishing touches like rub down and painting as it turned out better than i thought for first go! 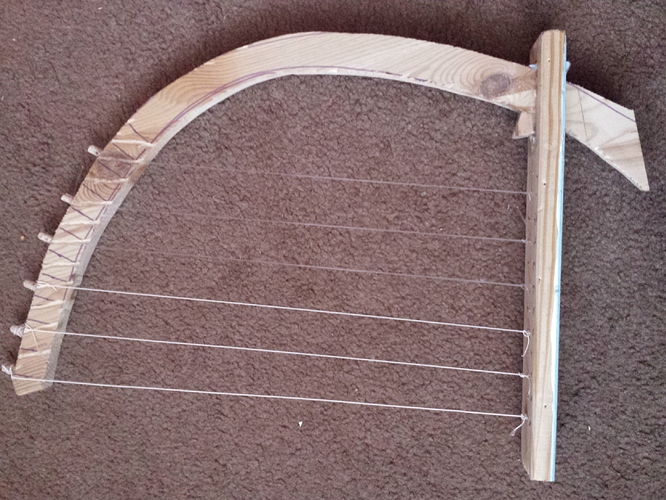 Cant seem to upload the video

will sort that out later

OK won’t be bothering to upload the video after all. It exploded on me last night while tuning. I think the extreme curve put too much stress on the arm which caused the failure. Looking at the items on display, it appears the arms have a more obtuse angle which puts a difference direction of pressure on the joints and makes then requires a greater force to cause failure. Version two will be attempts tomorrow night.

Learn so much from getting on with it.

Forgot to post here. I’ve been working on a new version after spotting the right kind of branch on my tree a few weeks back.

First test with some strings. The wood was green but it was still not a bad sound. 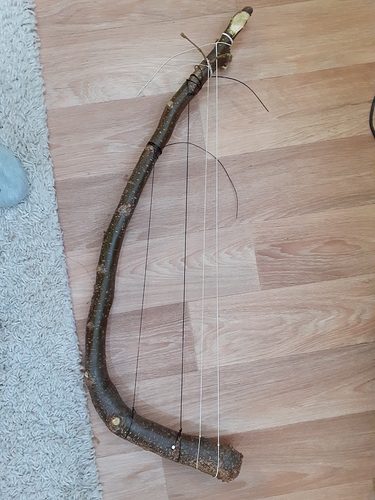 This week I’ve been making the sound box. The wood used is quite soft so lots of varnish. The ancients would often use hard cured leather and/or resin. I don’t think the sound will be very loud, as it would have taken another few hundred years before the box evolved to be bigger.

Almost there. New strings to pick up at the weekend!

I do have some videos but cant upload here

will extract the audio channel instead