Righty-ho, lets give this God of the month club a go! Don’t fret too much about following along with everything, it’s meant to be a bit of fun as well as informative.

I think we’ll start in November with Khonsu.

Week 1: Try to find some historical sources for myths, images of Him in temples etc

Week 2: Look through blogs and forums for modern followers UPG. How does this compare to the historical sources?

Week 3: Introduce yourself. In a quiet place, perhaps near your established shrine (if you have one), set up an image of Khonsu. You could also use a mundane item to represent Him if you don’t have time to print or draw a picture. Reach out to Khonsu, say hello, and see if He has anything to say to you.

Week 4: “In conclusion…”. Think and discuss the last three weeks. Learn anything interesting? Think you might stay in contact with this deity? 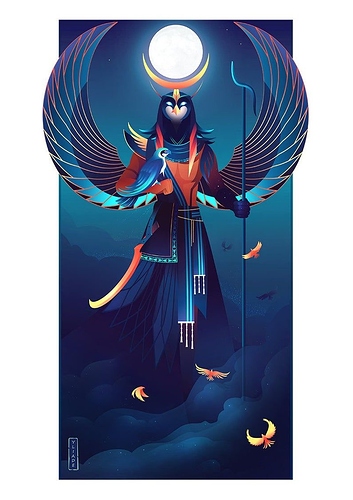 Just asking… We’re you intending us to comment at each weekly stage or all at the end?

I took it to mean we discuss at the end.

I thought the end of the month would be best, to allow people to catch up. But go with what feels right. I’ve been finding Khonsu is a hard god to nail down!

A bit early, but I thought I’d share what I’ve got so far.

To begin with, it seems that Khonsu was known as an agressive and violent deity on one hand and a protective healing deity on the other. Known for healing and combatting bad/evil spirits and enemies of the pharaoh. However, as time went on he became known more for his youthfullness, healing and protection rather than for an agressive/violent side.

He is also known as a friend of Thoth and played Senet with him.

I spent some time with him and he seemed to be mentioning the joy of the Christmas season and board games as a means of bringing family together. I’m not usually one for board games, however I think this year will be different!

I may well keep in touch with him.

Was saying to @LittleIbis that I found some creation myth involvement and just remembered where. It’s in the Cobra Goddess book by Lesley Jackson. Apparently Khonsu has some involvement with creation. Apparently in his cosmogony the original creator is the serpent Kematef who is the primeval form of Amun.

Can’t find my notes right now but I did find some disturbing stuff about Khonsu strangling other deities, sometimes even killing them. I suppose every god and goddess has myths that we’d rather not see. It also ties in with his role as exorcist. Are we all familiar with the story of the Princess and the demon? I’ve got a 90s copy of Roger Lancelyn Greens ‘Tales of Egypt’ and it was always one of my favourite stories. A foreign princess becomes poorly and it is soon discovered that she has been possessed. Her father writes to Egypt as they have the best magicians in the land. Khonsu is asked for help and He puts Himself in a little statue of Himself, that is taken to the princess. Khonsu soon kicks a*se and the demon is gone. The foreign royal family are so thrilled that they keep Khonsu as a sort of prisoner in a gilded cage, until one day, He has enough and leaves.

I’m assuming that, to have the strength and skill that no demon will mess with you, you’ve got to be a pretty tough god. Perhaps some of His rage used to overspill and He’d take it out on lesser deities? It’s even possible that demons may have “stuck” to Him and made Him do those things. Perhaps I am making excuses for Him!

I haven’t reached out to Khonsu yet. I found a section for Him in my Netjer folder, so I must have done a GOTM thing for him back in 07 or 08. He didn’t seem overly eager to keep in touch but not rude about it.

Will find my notes later (feeding little one right now) and see if I have anything to add. There’s not many devotees of His that I can find but it could be that they just don’t have an internet presence/blog.

I have that book and here is my telling of the story based on that version for those that don’t have it.

There’s not many devotees of His that I can find but it could be that they just don’t have an internet presence/blog.

Did see a few postings concerning him in one of the closed groups I’m a member of, a really long prayer too, but of course I don’t really want to be copying that over to this open one without permission. Not many around that I’ve seen.

Apparently Khonsu has some involvement with creation. Apparently in his cosmogony the original creator is the serpent Kematef who is the primeval form of Amun.

I’ve just found my notes. I’ve scribbled something along the lines of “Temple @ Karnak > the great snake who fertilised the cosmic egg and travelled to Thebes”. So it would appear that Khonsu starts out as a rather terrifying creator god, then goes through some sort of epiphany and becomes a benevolent child-like god.

In my note book, I also have “Keeper of the books of the year. The list of who is going to die that year! People appealed to Khonsu the Merciful to change their fate”

“Khons=Khonsu. In a triad with Amun and Mut”

“Name means Traveller (is this fact?) Sometimes took baboon form like Djehuty and was known as “who eats the hearts of the dead” (Pinch)”
Do all lunar gods have a baboon form? It’s funny because I was watching a cartoon with LO the other day, where the main characters met the dream baboon. She, the baboon, was like a sandman character that got sleep dust from the moon to send children to sleep. Adorable!

I know there’s a lot of people who don’t like to compare Kemetic myth to Christian myth (I’m usually one of them) but is anyone seeing a parallel between Khonsu and Jehovah/Yahweh? They start off as quite an angry, even dangerous god, then take on a child form (Jesus) and become much kinder. I’ve had too much caffeine today

In my note book, I also have “Keeper of the books of the year. The list of who is going to die that year! People appealed to Khonsu the Merciful to change their fate”

I wish I’d written down which of my books it was from. Don’t fancy going through them all again but I think I might have to.

Are we all familiar with the story of the Princess and the demon?

You’ve both need doing a fair bit of research!