Cupboards are good. My niche ones are DVD cases which are narrow and of good height. Such things make to keep the clutter out of the way.

OOO and I see a Selket statue!

I got mine on my honey moon in Lyon, just caught sight of it out of the corner of my eye in a shop and just had to get it much to the bemusement of my wife

My main altar is in my room, away from visitors. It is dedicated to my favourites- Sekhmet Bast and Anubis although somehow Hathor has crept in there lately. 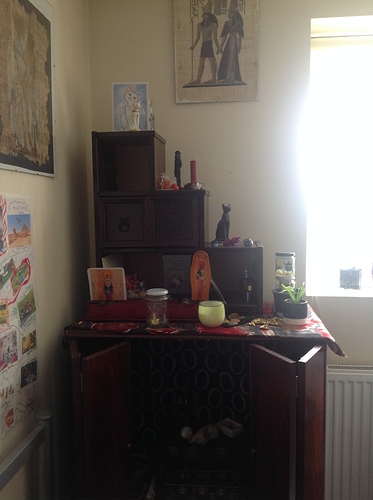 There are special spaces in bookshelves, of course 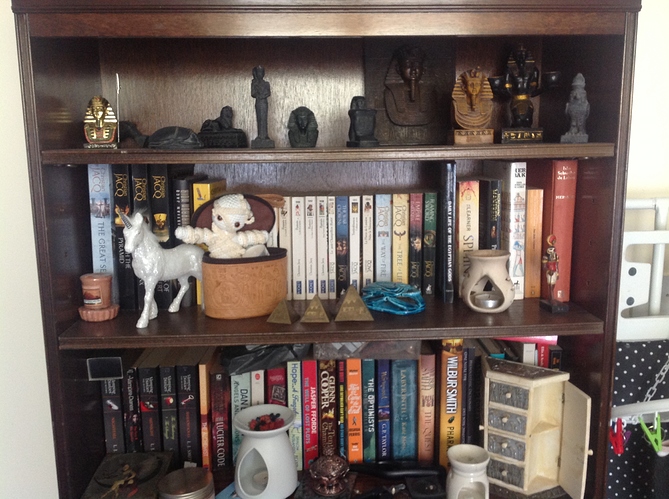 And my favourite one is in the sitting room, my Akhu shrine. I really have to thank KO for teaching me this. It is a work in progress still. 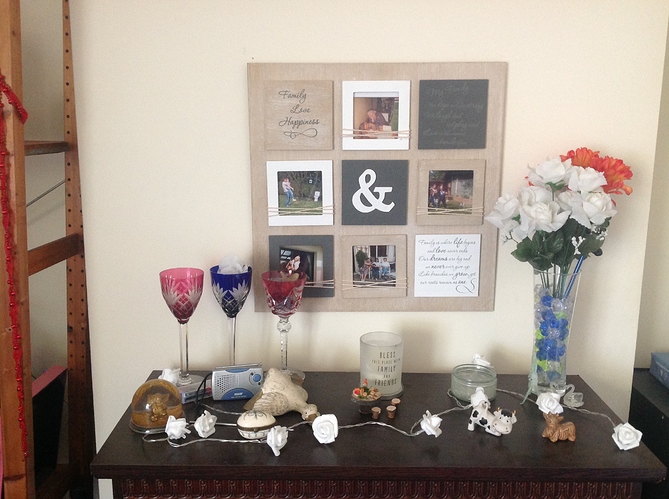 Have to say, your book shelves are neater than mine! I have mine completely stuffed tight with books and other junk. I should really get a larger book shelf I suppose

I bought the large bookshelf especially to house my egyptian books, because the larger ones with the best photos don’t fit on normal shelves.
But now I need more large books to fill up the bottom shelf…

Bookshelves are a bane. I’ve a number of them scattered around the house and always thinking that should do it, but no, so now the reading pile by the bed is growing - not quite dangerously yet

Any excuse to buy books though! I think I put my book list on here somewhere if that helps in the shopping

You did indeed. I will add my book recommendations when i get a chance, just reading one of your books in kindle for now and designing a logo for selling my crafts online. When it is all sorted, i will show everyone on facebbok but it will take a little while as i want the website and instagram to all launch together .

Good luck with that endeavor!

I’ve been jazzing up the inside of my main Wepwawet shrine since I posted my pictures. I painted the whole inside of his space with gold paint, laid white linen beneath him, and a starry sky based on tomb ceilings above him. I also made some linen bandlets and a great cloak for him so that I could increase the ritual that I do for him (I’ve been doing a lot of work on that ritual but I think I’m nearly finished, at least until such time as I ever want to open him).

I do like that cloth for the sky. Not thought of that before. I sort of left the insides of mine black. Might have to rethink it… Might have some gold paint in the attic

Love that statue too. Enjoy!

My pre-move shrine for Wepwawet. I’ll necessarily need to change it up once all my stuff catches up with me, but probably not too much at the heart of it (essentially what’s shown being the heart of the shrine.) I just won’t be crammed into a walk-in closet. On one hand I did actually really like the enclosed closet, but on the other, I’ll now have a whole room to use instead. 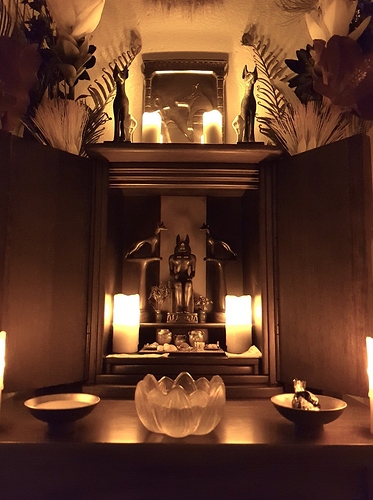 Love it! I have even less room even though I do have in fact a whole room to play with, but it has to share with other things. Of course enclosed shrines were the thing back then for the temples. We’re perhaps a bit luckier, but homes though things seem to have been more free form. Its whatever works for you as always!

My shrine sadly needs some TLC; a good clean and some repairs I’ve been putting off for way too long. Represented here are Bast, Hetheru, Wesir, Sutekh, Anubis, Tawaret, Heru-Ur, and Nut. I’m keeping my eye out for the perfect Sekhmet icon. 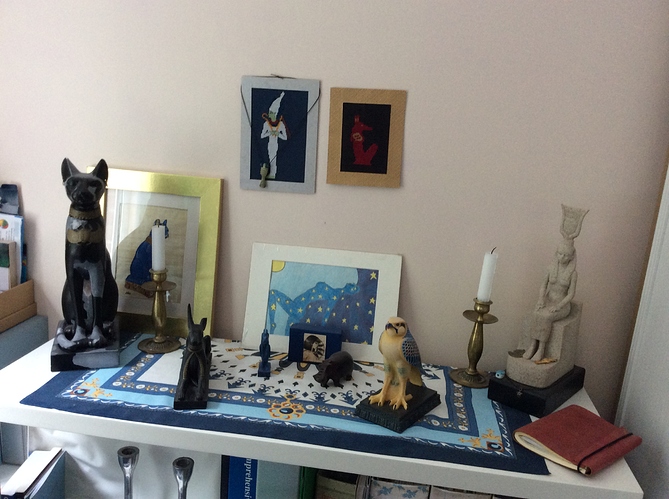 Pictures are good. I found a wonderful Sekhmet picture at a pagan conference a couple of years ago which did me well until a proper statue came my way. Hang in there!

Oh I looove that Hathor statue :o I have a Wadjet (people commonly know it as Sekhmet-Mut) from the same series, I hadn’t realised it was a series!

I found Her on a market stall. I find all of my statues in second hand shops or on markets. I feel like they’ve chosen to come to me, rather than me looking for them.

I feel like statues are, to some degree, who we say they are. Like if it has Nephthys’s or Isis’s hat on, that’s one thing, that clearly says who it is. But otherwise? It’s mostly up to us. My statue (from the same series as yours) is I think technically a reproduction of a statue of Wadjet, but most people I know “recognise” it as being Sekhmet-Mut, or at least Sekhmet. Which is valid! I used it as Sekhmet-Mut for a while as well and got no complaints. I also use an “Isis” statue as Hathor, because I was told to. There’s no hieroglpyhs on it saying different, so, no issue

I love when statues are obviously choosing to come to us. It feels really nice.

Yeah Isis and Hathor statues can be a challenge. I have one which could be either, but Hathor images tend to have ears more visible and rounded like a cow. This statue of mine is like that so I refer to her as Hathor (the reason I bought it as I already have an Isis statue).

But then, its what you want it to be and that particular deity will fill it up as required

As some of you have seen already from my postings about it elsewhere, I finished up my big shrine upgrade on Monday. Some pictures can be seen on one of my tumblr posts: https://bigbadjackal.tumblr.com/post/186795318295/di-wep-ronpet-nofret-today-i-finished-prepping 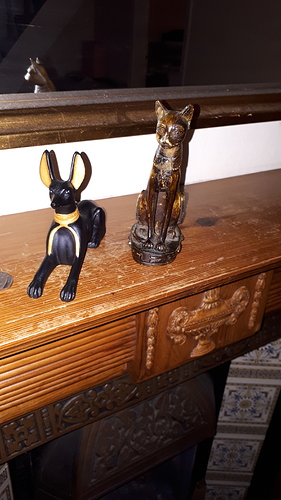 My mom got these from london for me. I think anpu noticed how stressed i was not having any statues.